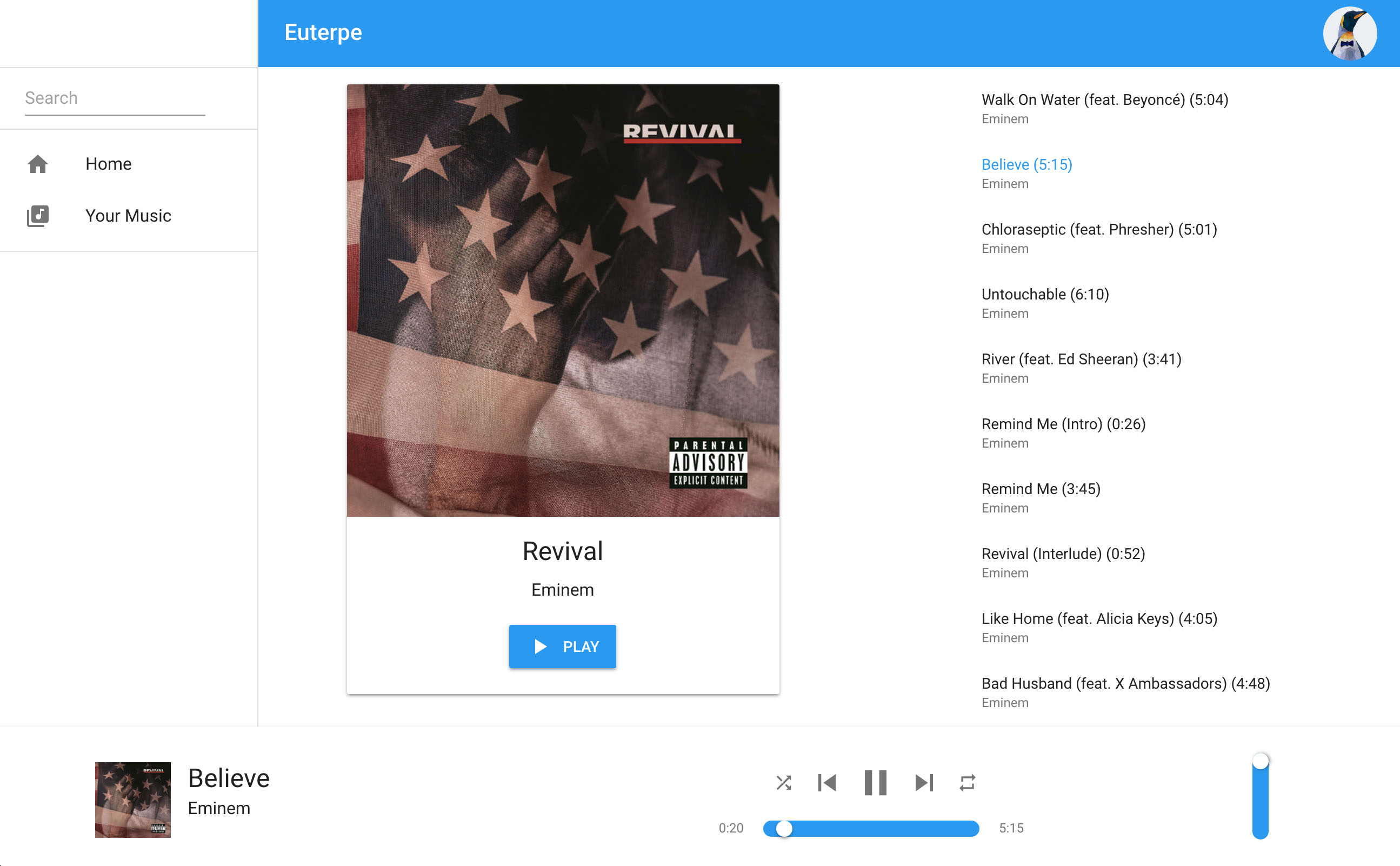 If people take anything from my music, it should be motivation to know that anything is possible as long as you keep working at it and don't back down. - Marshall Mathers

Music is a large part of my life, and I needed a simple platform to be able to listen to whatever song, album, or playlist I wanted to. There are some services out there already, like Spotify, Google Play Music, Pandora, or even Apple Music. However, these services have rather strict limitations. For example, Spotify doesn’t even allow playing a specific song on mobile: instead, you need to play the entire album in shuffle mode and hope your song shows up. This was inconsistent with Spotify’s desktop version which lets you pick and choose songs. I searched around, and the only easy way to listen to the specific song I chose was with YouTube; however, the interface wasn’t really designed for music and I needed to pay for a YouTube Red subscription just to be able to listen to music with my phone’s screen off. Thus, I decided to create my own music interface, one that acts like Spotify but retrieves songs from YouTube. I named it Euterpe, after the Greek goddess of music. This website can be run on the desktop or phone and provides an easy-to-use interface for accessing your favorite songs.

In order to create this interface, I needed a few different things. For one, I needed an Application Programming Interface (API) to let me access song names, artists, cover art, and other metadata. I decided to use the Spotify API which has a huge library of over four million songs and met all my criteria. Then, I needed to retrieve the source of the song through YouTube. I decided to build my own API using Node.js which searches YouTube for “<Song Name> by <Artist Name> audio” and scrapes the source of the first result then sends it to the client. After I had met these needs, I could begin designing the interface itself. I decided to use the JavaScript library React, along with Material-UI theming. React makes developing web applications easier, and vastly improves the performance of said web apps. Material-UI provides some premade React Components that implement Google’s Material Design Guidelines.

The end result of this project was not only something I was proud of, but something I could use every day. I am most proud of this project because of my use of React and Material-UI. These two technologies are commonly used together in the open source and web development community. I wanted to learn these tools to not only better myself as a web developer, but also allow me to better contribute to the open source community. I feel I have learned React well and can now confidently work on pre-existing open source projects, or even start my own without worrying about whether the code is too messy or doesn’t follow the usual frameworks used. Learning React itself isn’t such a difficult task, however, it’s easy to run into problems when developing an application. Diagnosing these problems is what really allows to better understand the technology (compared to just reading a book on it, without actually engaging).

Building Euterpe helped me understand and utilize various APIs, React, and Material-UI. I can confidently say I’ve created a functional and useful web application in React. I can show this off to friends, family, and (of course) use it myself. Once I had the strong motivation and roadmap to creating this application, it was only a matter of the finer details of programming in React. Having this knowledge of React opens me up to many job possibilities, as well as the ability to better contribute to the open source community.

Made with by Alexander Cardosi